It might’ve been two weeks already. I left my long time home and currently living with siblings, who gave me a room until I can find an apartment. The main issue is to find an affordable pet friendly place that will take a medium sized dog. As days past, I use work to stay distant. Is it unhealthy?

I came “home” today, driving through a snowy evening to a family gathering. No idea what’s going on and I guess I’m experiencing burnout. Also been having some physical aches. The emotions I feel are conflicting, but I am okay so far. 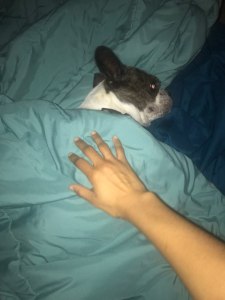 After so much searching, and anxiety, I finally contacted an agent from Michigan Humane to temporary take my Aussie mix rescue Brody into foster care until I can find an apartment. It turns out he is doing well and he’s so funny. I really miss him. I’m glad he is socializing with another dog. Still, it feels like I’m stubbornly having a fight that I shouldn’t have. The apartment search is difficult and rent is always an issue in America. I remember crying a couple times being told that I would have to surrender him if I couldn’t find him a foster before I left home. Now, there is still the apartment…not sure what will happen yet if I can’t find anything. Will Brody be put into adoption?

With the exception of one, each sibling has a pet dog. My stay has me growing close to a Shitzu mix, Wallie. I don’t think I ever slept with a dog in the bed before.

Pokemon Brilliant Diamond is keeping me busy. It’s almost ritual to play a linear core Pokemon game, and I was thinking whether to get it or wait until Jan 2022 for Pokemon Legends: Arceus. So, I said yes and also pre-ordered MONSTER RANCHER 1+2 DX. They are both similiar games under the genre of monster/pet bonding games.

Been a bit slow with everything else such as writing and drawing. Right now, my job is a safety net and interacting with co-workers a bit better. Before I moved, I updated DAWN OF END, reaching its 40th chapter. I feel proud and its enjoyable.

I’m the type of person who works and loses track of time. This week, I’ve been busy. A sad feeling comes to me as I both work desperately (or so it feels like) in preparation to leave my home. I grew desolate at the thought of having no immediate family; it actually exists despite thinking that this would be a good time to enter a new change. I also grew desolate that I JUST might have to let go of my rescue dog, which I only had for a month. Cried a couple times, but this week, I got some foster inquiries.

During work, I had a random question pop into my head — is there such thing as “easy work” (an easy job)? Reader, you might think so — if you are doing well, get adapted to it, it may seem “easy”. Then the hard part starts when it gets “repetitive” or if physical strains start to begin. Then down the road, you start to dislike it. Or it gets ‘difficult” when you aren’t mentally prepared, especially if the home isn’t socially pleasing. It gets difficult when there is a change in routine as well suc has lack of staff or essentials. Is retail such as working at food chains considered “easy work” that shouldn’t have high wages?

I will be taking my mother’s business and economy book.

VOICE OF CARDS: Isle of Dragon is a laid-back fantasy adventure RPGthat goes against Square Enix’s spoiled routine of 2DHD or near hyper realistic 3D RPGs. The same company who brought us Octopath Traveler, Dragon Quest series and Final Fantasy series–where they may incorporate either real time or turn-based combat with full voiced storytelling–instead, the world of VOC is expressed like a tabletop game narrated by the gamemaster, a focusing melody by Okabe Keiichi (岡部 啓一) and imbued with cards, which represent characters, towns and the whole world. Would such a game be highly criticized?

The main character is Ash (or Dust), who seeks a hefty prize when the Queen of Advent issues a decree — destroy the dragon. You are led by Yasumoto Hiroki or Todd Haberkorn, respectively the Japanese and English gamemasters, or narrators, through the game. It is difficult to explain the charm of their dry, relaxed expression that offers you advice or praises you. More another time. The character design of Kimihiko Fujisaka (藤坂公彦) is also marvelous.

I watched the Eris movie again while eating dinner. Jut needed to unwind. Picked up the pad and there we go.

I put up the colored pencils so I’m just pencil sketching now until I move. Not sure if I will ever make a great picture as I reflect.

I’ve returned to the Kingdom Comic by Hara Yasuhisa, who is dedicated to creating a loyal war drama based on Records of Grand Historian (by Sima Quan) I finished the Brothers Rebellion arc, which spanned 5 volumes.

I am quite nervous. In under twenty days, I have to move out of my home. On the good side, I have received a (possible high paying) job, starting Monday, but I have to again accumulate a savings bank and desperately depend on a credit card and seasonal paycheck. Furthermore, I’ve bene looking for a means to place my dog Brody (see Daily Life – Reality of bad luck. Am I too worried? or check my Instagram) in a temporary fostering program. I feel like I’m pestering people, going through at least 25 contacts.

I’ve been a little upset. It’s a hard call how everything will work out.

On the good gaming side, Mario Party SUPERSTARS has arrived. Watch me play Yoshi’s Tropical Island on youtube!
In the world of food, I went Mediterranean and tried some kebob sandwiches and Sharwarma. Mother was into chicken liver and somehow she got me into it, but it’s a bit tough to bite.

I’ll try to keep myself calm. Family worked together to get me a car so I have to be positive, right?

Trying again from my last drawing of Miyata. (2018) 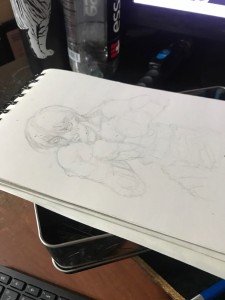 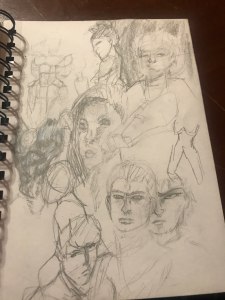 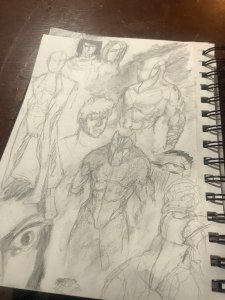 Ragged Knowledge has created some of my favorite compilation videos. He is so dedicated and has found a creative craft in it, despite the lack of monetization, risking flags and shutdowns. With the end of Super Smash Brothers, he did not disappoint with the reveal of Sora from Kingdom hearts series, and his latest video expresses a thousand superficial feelings from various gamers and fans, including one who explains how much Kingdom Hearts means so much to him. This also includes the love for Smash Bros’s director, Sakurai Masahiro.

It’s over three hours long, showing the reveal and the gameplay presentation.

I am not even sure if I have a series that I am deeply connected to. If anyone asked me what my gaming childhood was, or what got me through hard times, I probably would give off a lot of answers regarding Sega and Nintendo (and writing, including D&D, but I’m done with D&D). There was also playing card and board games with my family.

Currently attempting to finish a short 95 page book, which is over 20 years old, before I throw it away.

Depending on life savings, losing a car and a job, or just plainly not making much. It happens to everyone, I often tell myself. When I told myself that it happens, I try to maintain a sense of normalcy to gather resilience. The question is — how to stay calm in such a situation? In addition to the need for an apartment, and spending extra on delivery for groceries there is a lot to take in. It then leads to the frantic thinking and nervousness. “What will happen to me?’ It always happens. Thinking back, I always had entries about lack of money. It’s not something I’m good at I suppose. Despite how much I worked, and how frugal I can be, I couldn’t maintain a stable bank.

it could be possible that my anxiety is increasing due to process of selling my house. What will be I suppose. I’ve bene aiming for a driver’s position for months; has it been obvious that I like vehicles?
All I think about is work, especially in these situations when I feel like I lack money. I just have to gather courage for alternatives.

If I think about what I care about, especially for my new dog, perhaps that will motivate me. In the gaming world, I’m having fun and getting frustrated at Super Metroid. Haha, I told an interviewer my little Metroid story and I how I hated the series. I’m almost motivated to attempt the first game again.

Story and book wise, with all that’s been going on, I haven’t sat down to read (OR DRAW) much I wonder if that should change before I move. When it comes to writing, I finished two chapters of Dawn of End in September. It really is a fun story as I imagine it in cinematography and make it passionately loyal to the original series. I also picked up some status.

TOP 5 DoE Chapters with most words

Nothing too eventful I guess?

Lately, I’ve been behind my exercise routine partially due to the cleaning of the family home. Couldn’t get my mind off of it, having found old things. Which reminds me of today and yesterday.

Luckily, I had some work on the weekend and saw many families in a variety of costumes, from food and animals, to Marvel and DC superheroes. In the game world, I saw Master Chief from HALO, a few Fortnite characters particularly 8 Ball, and a variety of Nintendo characters. I saw a couple of impressive AMONG US costumes. PJ Mask, Ninjago and Paw Patrol especially with PP’s new movie, remain popular among. I even saw a couple of Gokus (Dragonball); from Demon Slayer, I saw Zenitsu and Nezuko.

The ones that really surprised me was HOCUS POCUS and GHOSTBUSTERS. I know they have movies coming out, and maybe recent merchandising is pushing it, but I’m surprised by the feverous display of it all. Especially Ghost Busters, when the old crew are barely shown in recent times. One family told me that their kids are watching the retro cartoon.

“Fries Before Guys” is a pencil bag for niece, which she left. I sent it to her new home since it fits her so perfectly.

It’s difficult to throw things away, but at the same time, I don’t want to carry/move too much. Would it be better to start over? Some things can’t be replaced or found such as portable radios and instruction manuals. Or they just too expensive to buy again.

My oldest game system is my N64.
I’m taking the PS2 Lite (and it works) but not sure what to do with it since its missing a peg and the controller glitches. Believe it or not, it’s a stolen item. What would I say that? I think I did before? I’m not worried because for it to be left here [at home] means someone didn’t care much for it. I will leave the story behind it undisclosed.